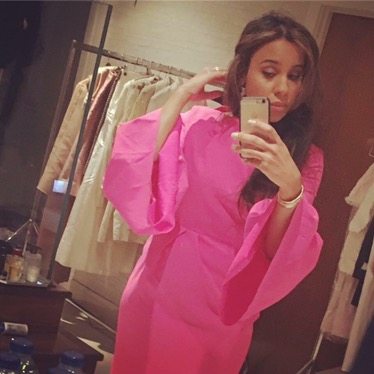 Roksanda Ilinic is the designer who is anticipated to give tough competition to Roland Mouret and Victoria Beckham. Where they have left off, Roksanda interprets her flair on British Luxury Fasion for women. Her designs Incorporate blocks of colour, asymmetric lines and open ended zippers.
Serbian designer Roksanda a graduate in womenswear fashion from St Martins,has  had a firm fanbase and following with the likes of Michelle Obama, Samantha Cameron and the Duchess of Cambridge choosing her designs at political functions.  Ilincic studied architecture and design at the Faculty of Applied Arts, University of Arts in Belgrade, before coming to study at Central Saint Martins in London in 1999, where she earned her master’s degree in Womenswear.
Ilincic’s signature shapes use bold use of colour and bell shaped sleeves. She is becoming the luxury brand that women on the go are turning to. She constructs  effortless day and evening wear with a remarkable elegance whilst comprising a modern twist and approach to women’s luxury fashion. Lady Trump may not admit to stealing Lady Obamas speech. But she sure must have been studying Michelle’s style as fashion icon as Roksanda is Michelle’s Wardrobe staple for democratic conventions.
Roksanda Ilincic has many accolades to her name for her work ethic, garment construction and design elements including a Business Woman of the Year at the Harper’s Bazaar UK Women of the Year Awards and Red Carpet awards at the British Elle Style Awards and The British Fashion Awards.
Studying originally in Belgrade and completing a Masters in the U.K. In womenswear. Roksanda is an inspiration to all women carving out a career in fashion and design and is creating a benchmark for other designers to explore and approach luxury fashion. Roksanda opened her boutique last year in London on 9 Mount street. Opening with a rebrand of Roksnada reflecting her explorative and colourful approach to implementing great wardrobe essentials for the ‘Modern Woman’. From the school run to the boardroom to the ballroom. Whilst also being an exemplary Advocate for Luxury British Fashion.
La Fin X